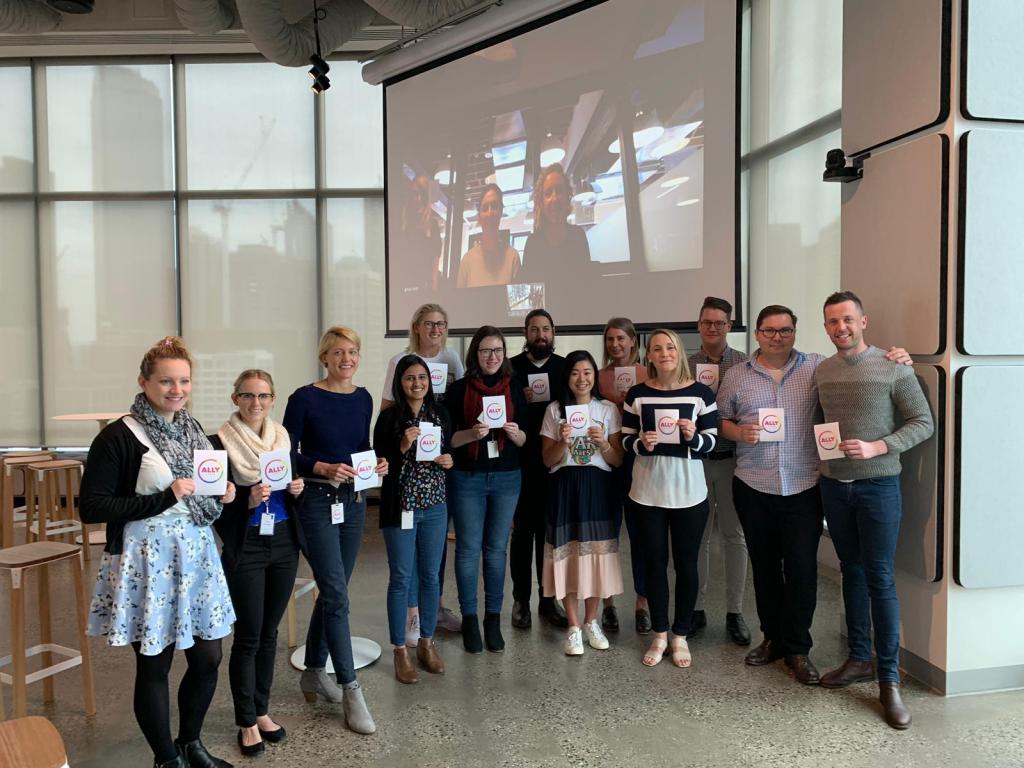 On Wednesday 15 May at our IDAHOBIT (International Day Against Homophobia, Biphobia, Intersexism and Transphobia) morning tea, 28 CUB employees were officially inducted into the Ally Program.  Each of the Allies completed training with Pride in Diversity in the last quarter of 2018 aimed at arming them with the knowledge and tools they would need, to be sources of support for fellow CUB employees.  To find out more about what being an Ally means and how CUB employees are embracing diversity and inclusion, we spoke with Lana Doyle, National Account Manager for IBA, the co-lead of CUB’s LAGER Network, and a newly appointed Ally.

As co-lead of the LAGER Network Lana helps to organise events, as well as engaging with external stakeholders such as Pride in Diversity and Out for Australia, to increase CUB’s support for the broader LGBTIQ community. ‘We are an employee-run group and our goal is to create a supportive environment for everyone, regardless of gender or sexual orientation. We raise awareness by celebrating LGBTIQ days of significance, running training sessions and hosting guest speakers.  For instance, last September Jason Ball, founder of the Pride Cup, shared his story of tackling homophobia in sport with CUB.’

The Ally Program was born out of a desire to provide an opportunity for more employees to get involved in showing their support for LBGTIQ individuals and the issues that affect them. ‘The aim was to make LGBTIQ inclusion something that everyone could be involved in. There are so many supporters who are willing to make a difference and we wanted to bring everyone along on the journey towards making CUB an even more welcoming, safe and supportive environment,’ Lana explains.  ‘The role of an Ally is to attend LGBTIQ awareness training, which we ran last year, and to show leadership by being publicly supportive of sexual diversity. Allies display stickers at their workstations to identify themselves as Allies, and they act as role models for non-discriminatory practices and language in the workplace.’

So who exactly can be an Ally? ‘Anyone!’ says Lana. ‘The positions are open to all, regardless of sexual orientation or gender identity. An Ally supports LGBTIQ inclusion and is an agent of change who challenges homophobia and heterosexism.’ However, Lana reminds us that this policy of open acceptance does mean that it’s important for employees to understand that Allies are not necessarily experts in LGBTIQ issues and may or may not be from the LGBTIQ community.

IDAHOBIT is celebrated today, the 17 of May.  At Wednesday’s morning tea, CUB’s D&I Committee Co-Chair and VP of Sales, Rose Scott, spoke briefly about the day as she presented the new Allies with stickers that symbolise inclusivity and acceptance for all CUB employees. ‘This was an opportunity to acknowledge IDAHOBIT, while reiterating the importance of fostering a safe and inclusive work environment,’ Lana tells us.

‘At CUB, diversity and inclusion means creating a high-performance culture by attracting and developing the best talent and creating a supportive environment in which all our people can perform at their best.’ Lana goes on to explain that commitment to these values involves more than just talking about them.  It means taking action. ‘While we believe that leveraging people’s diverse attributes will give us deeper insights into consumer needs and enhance relationships with all our stakeholders, we also put diversity and inclusion into action throughout CUB.  Great examples include the revised parental leave policy, the promotion of workplace flexibility, unconscious bias training for managers, the AMBER League, and the celebration of cultural days of significance. And of course there is also the LAGER Network and our freshly inducted Allies.’

With just over four years at CUB, Lana is passionate about the company’s commitment to diversity and inclusion. ‘I feel strongly that we need to help create the world we want to live in, and for me there is still stigma in our society, not only regarding LGBTIQ inclusion but also relating to gender equality, race and disability’, Lana explained, when asked why she has become part of the Ally Network and taken a lead role in the LAGER Network.  ‘I think it’s important for people to challenge their own biases and comfort zones, and become more aware of the impact of their behaviour on those around them. Being part of the LAGER network and the Ally program provides me a platform from which to encourage this thinking among my colleagues at CUB. Being able to contribute to such positive change is incredibly rewarding.’